So after (sort of) singing Clipper Darrell's praises, it appears that Mark Cuban has offered him a similar job as the Mavericks #1 fan.

The sports world waits to see if he'll take Rental Man with him.
Posted by larrydigital at 10:58 PM No comments:

Hells yeah! Who wouldn't want in on that action?
Posted by larrydigital at 11:32 AM No comments: 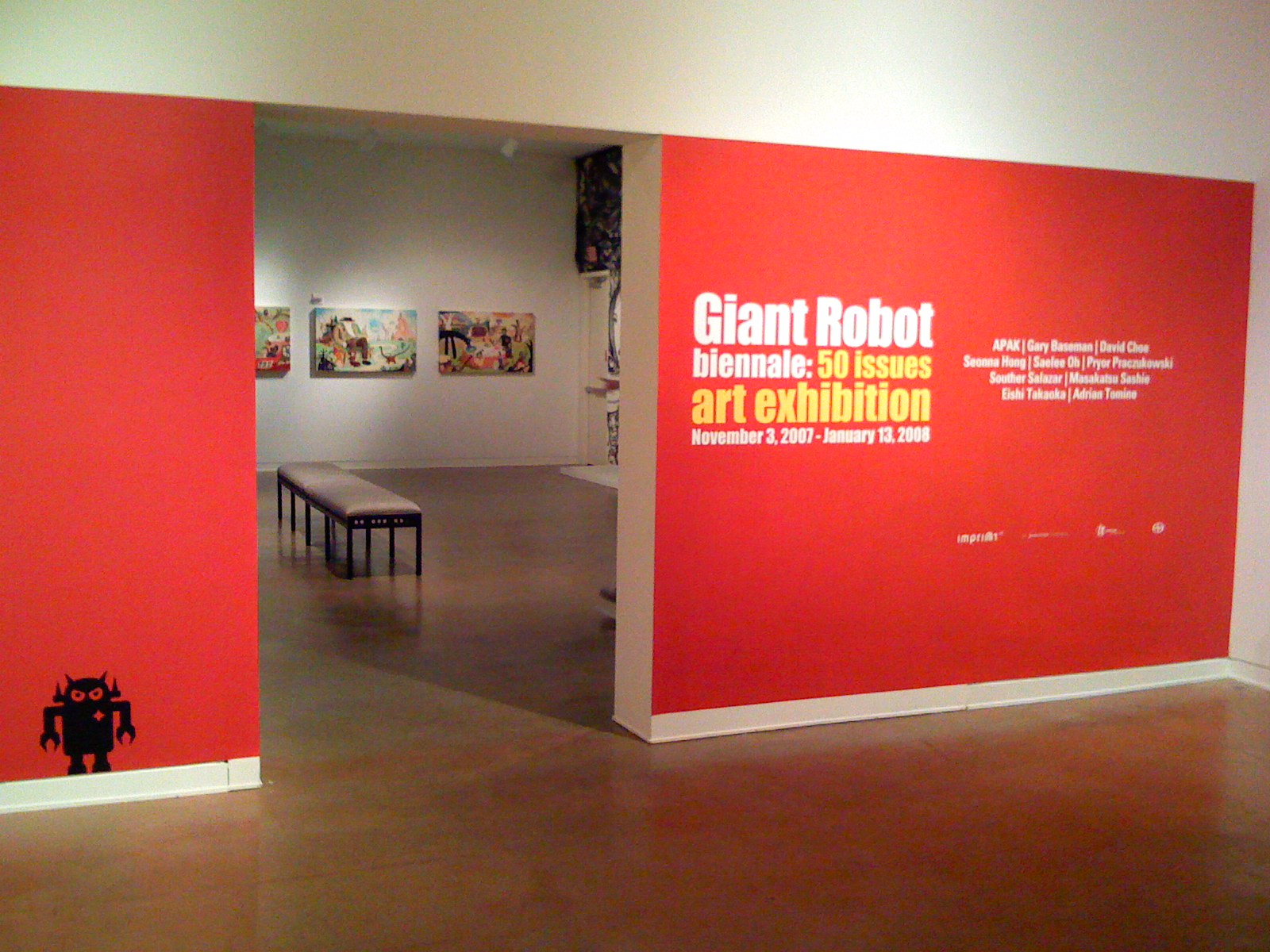 Earlier today, I made it out to the Giant Robot Biennale: 50 Issues exhibit in Little Tokyo. I'm familiar with Giant Robot magazine so I had a pretty good idea of what to expect. Truthfully, there wasn't a whole lot of work on display (in comparison to, say, the ©Murakami exhibit that I previously posted about) but what they did have was really interesting.

As soon as you walk in, there's a display by Adrian Tomine. If you're not familiar with Adrian's work (and you should be because he's awesome), he's done comic work with collections such as 32 Stories and Sleepwalk but he's done a bunch of work for Rolling Stone, Time and New Yorker. All of the work there was cool but the ones that really stood out for me, besides Adrian's, were the pieces by Saelee Oh and APAK. Saelee's work was ridiculous. What I mean is, that it looks extremely simple and tremendously complicated at the same time. Swimmers underwater, or swimmers in space, surrounded by paper cutout seaweed or weird moonscapes, matching paper cutout whales and other animals. Seriously, I could've stared at her pieces for hours. Check out her cool ass website here.

APAK, a husband and wife duo out of Portland, produced these amazing little paintings on wood. Reminiscent to my uneducated eye of Audrey Kawasaki's work but that's probably because of the very minor coincidence that they work with similar materials. APAK also presented these amazing little sculptures. Check out APAK's website here. 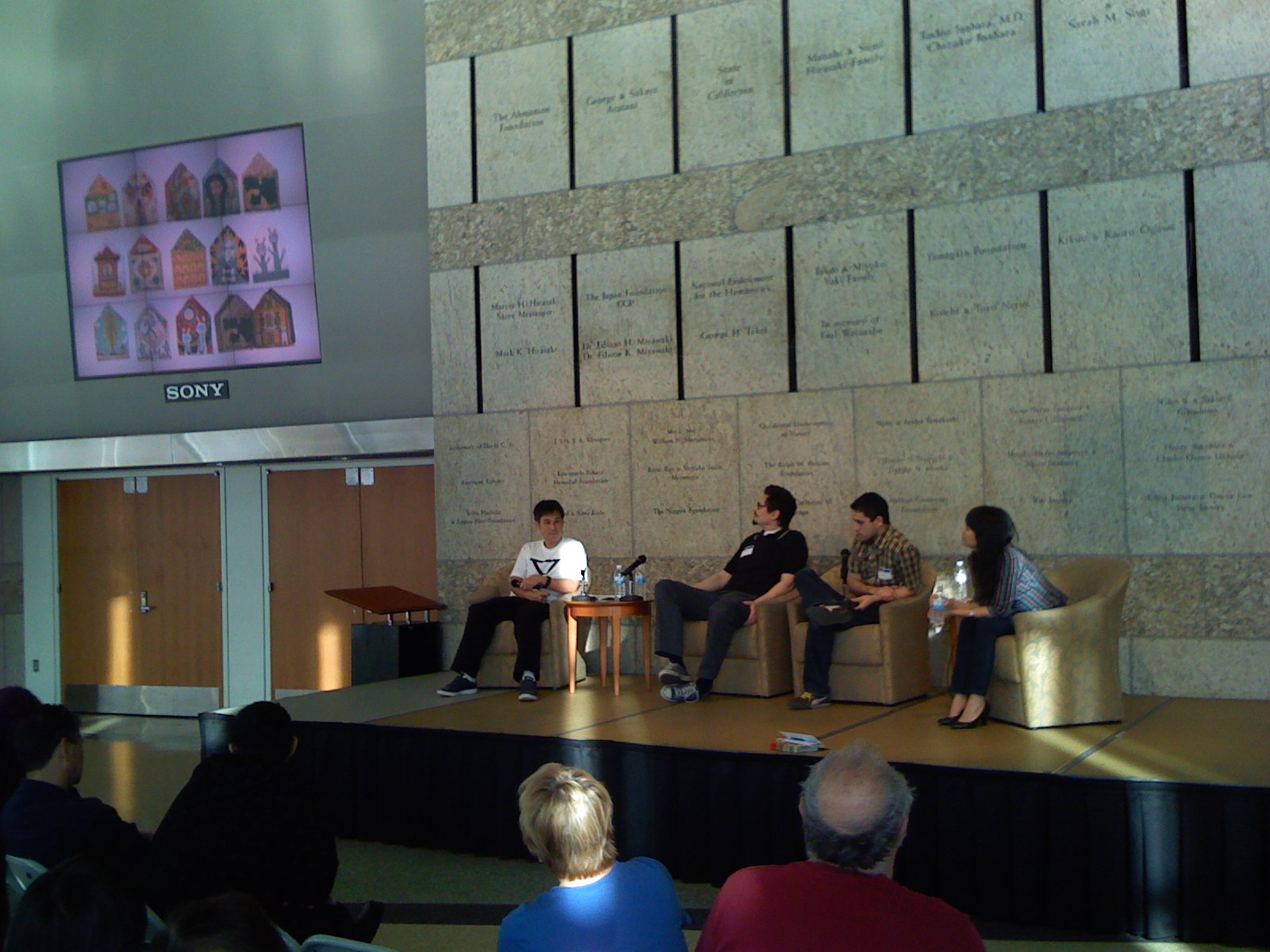 Finally there was a panel with a few of the featured artists, namely Pryor Praczukowski, Souther Salazar and Seonna Hong. I'm always interested in hearing an artist discuss their creative process so I enjoyed listening to these guys discuss their work. Seonna said something in particular that really stuck out to me. In one of my previous posts, I mentioned that with my podcasts, I have a tendency to tinker and I have to set deadlines with them or else I'd never actually release them. Well, Seonna said something along those lines. Basically she said that with her work, which began as paintings featuring various animals and characters but have now progressed into more abstract pieces, she has to be careful not to overwork her pieces. Like, when it's done, it's done. Not that I'm artist in any way, shape or form, but I'm glad to know that part of the creative process is being able to walk away from your work. I don't know, I guess it sort of made me feel like maybe I had the right idea. Like maybe I was on the right track or whatever.

Something else I learned from this panel, apparently, it isn't just professional artist Bean Robot and his gang of professional artist friends who favor short sleeve plaid shirts. Judging from some of the dudes on this panel, and photographs of past panels from this exhibit, evidently the short sleeve plaid shirt look is some sort of an artist uniform!

The Giant Robot Biennale: 50 Issues exhibit runs through January 13th, 2008, at Japanese American National Museum in Little Tokyo. If you're reading this and are only learning about the exhibit now, there's a pretty good chance that you've already missed it. You snooze, you lose, suckas.
Posted by larrydigital at 8:45 PM No comments:

the many moods of larrydigital, pt. 3

All right, ladies and germs, it's time to ring in the new year with a brand new podcast. "Episode 3: Your Ace From Outer Space" is now available for download.

The other day I was checking out my iTunes page for fresh feedback (something I do like, 6 times a day) and noticed that there was a brand new review from a user signed in as "Urb Magazine." I thought that this was pretty awesome because I used to be a big Urb reader back in the day. And in an amazing coincidence, I actually bought a new copy of Urb Magazine for the first time in almost 4 years that very morning. I was intrigued by the cover featuring Justice and Wale. Incidentally, both Wale (American-born rapper of Nigerian decent, pronounced "waah-lay") and Justice (French DJ's….. um, "joos-teece"?) will be appearing in future podcasts.

Anyway, back to Apple user ID "Urb Magazine," I realize that it's not necessarily someone from the aforementioned magazine. I mean, I don't need to be the 40th President of the United States to sign in as "Ronald Reagan," ya dig? Still, it was pretty cool. I have to admit that while the review was a positive one, I did take slight offense (very, very slight) to the implication that I took the name of my podcast from another (apparently) better known show.

I'm sure that The Many Moods of Playa Phi Playa is an interesting and entertaining show but I actually stole the name of my show from a 1950s exotica album that my grandfather used to have called The Many Moods of Arthur Lyman. I thought the title worked on a couple of levels. One, it fit the eclectic nature of podcast and two, as people who know me can attest to, I'm moody as fuck. Eh, it's my own fault really. I did zero research before posting my podcast. For all I knew, there was a whole different larrydigital out there somewhere. (Edit: And apparently, there is. The larrydigital on YouTube? Definitely not me.)

Look, I know how all that sounded, but I'm not complaining about the review I got, as I've mentioned many, many times before, I'm grateful for all feedback, positive and negative. And as I mentioned, the review was positive. So.... thanks!

One last thing, since I was asked, the title of this month's podcast is taken from an old U-Roy song that almost made the cut. I suppose that I probably should've changed the title but screw it, "Ace From Outer Space" sounds cool.

Alright enough of my nonsense. Enjoy the latest episode of the many moods of larrydigital.