Also, the Sport of Welfare Recipients 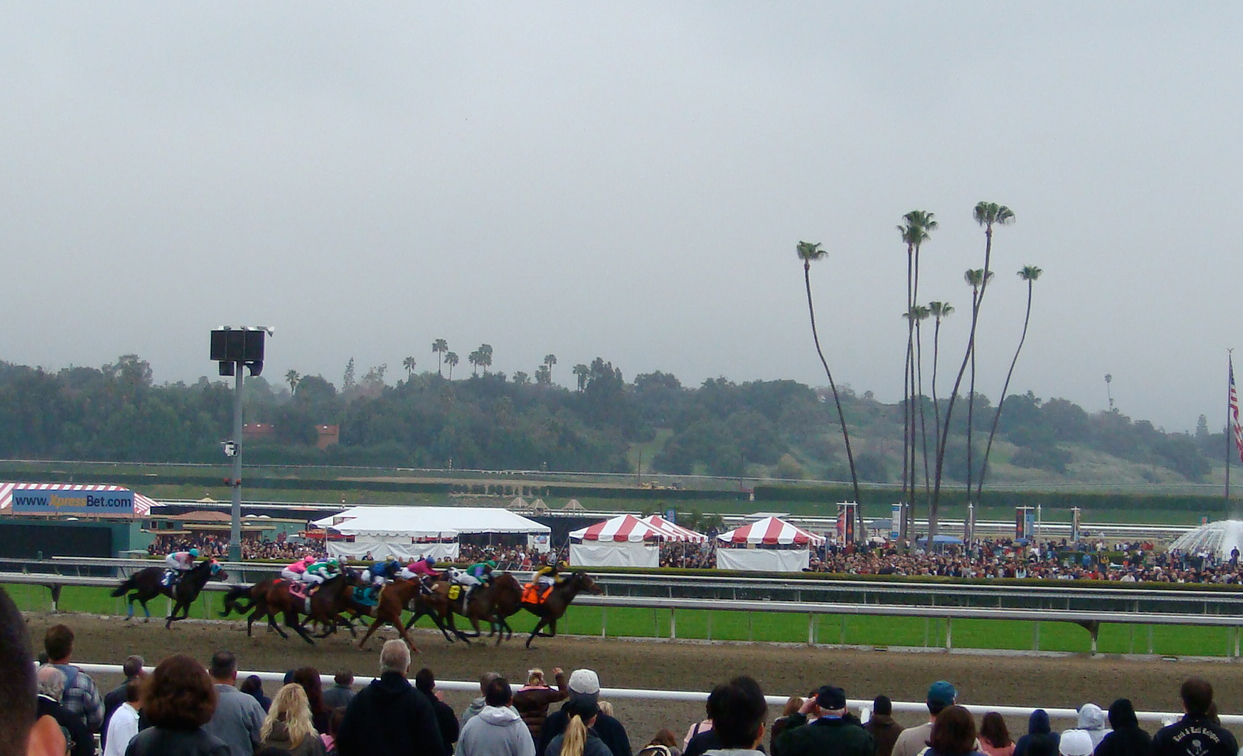 Today was the day of my semi-annual trip to the Santa Anita Park to enjoy the sport of kings... horse racing. Despite the cloudy weather peppered with the occasional drizzle, it was a fairly crowded day. Probably because KROQ's Microbrew Festival was taking place in the Infield Area. It's strange because I never actually partake in the beer festival myself but I always seem to be there when it's going on.

The track is a weird place. I enjoy the activity of the race track with the horses and junk but I'm always amazed by the mass of humanity that seems to accumulate there. As one of my friends mentioned, should the entire race track be gassed that day, there's likely to be at least a 3% drop in the local crime rate. I understand that it's wrong to stereotype a person by their appearance and all but something tells me that the 5' 3" gangsta with an "LA" tattooed on to the back of his shaved head (his fucking head!) probably doesn't have a straight job. I saw this lady stuffing apple sauce into the face of her tiny, tiny baby between the fifth and sixth races so I gave Angry Bob permission to kill me if I ever bring a wildly underage child to the race track. No words would be necessary either, just the sweet release of death.

I can understand if you want to bring your child to experience the majesty of the horses or whatever but cradling your baby with your right arm so you can place an Exacta bet with your left is probably a little inappropriate. And that's not mention that there seemed to be a whole mass of people that looked like they really should use their cash on a sandwich or something instead of playing the ponies. The grizzled guy in the tattered Members Only jacket and the busted pants zipper is a good example. Seriously dude, don't bet that money, go get something to eat.

For the second straight year, I tried Bean Robot's patented method of horse betting... divide the number of horses in a race in half and bet on the half with the best odds while your friend bets on the other half. One of your is guaranteed to win, right? Right! Of course, 50/50 odds sounds good on the surface but when you factor in the odds of winning for the individual horses (some horses were offering a craptacular 1:1 payout), there's a good chance that you won't make your money back even if you win. Now, last year, I was pretty successful and walked out of the park in the black. This time, the bottom fell out and I left in the red. It wasn't too bad though, especially when I got my biggest payout of the day in the 11th and final race. Thank you, Wine On the Porch! I'm pretty sure I fared worse out of everyone but I only lost about $40 so it wasn't a huge deal. Mertz was definitely the big winner of the day, hitting 3 separate Trifecas. Shocking.

There's a Dave & Buster's right next to the track, which I think is a fun place. It's got video games and stuff and it's mostly marketed as a Chuck E. Cheese for adults. And hey, that's perfectly fine with me. But I knew that I couldn't stay too long because there was a work-related birthday party going on there that night. I'm only vaguely acquainted with the birthday girl and I didn't want to seem like I was crashing the party... Oh, hey there, co-workers that I see every day. I know I wasn't invited and I totally knew you were all going to be here but I just happened to be in the area... Which was completely true by the way but still. Too bad though, because I had a totally awesome present to give her, courtesy of Santa Anita Park. Your loss, Kimi!

All in all, it was a fun day. I don't get a chance to go to the track too often but I always have a good time when I do. Truthfully, I didn't even mind the track's $9 sandwiches and $6 dollar beers. There was something strangely familiar about it. I guess those prices, coupled with the overabundance of pregnant cholas with peroxided hair, why... it's just like being at Dodger Stadium!
Posted by larrydigital at 11:34 PM