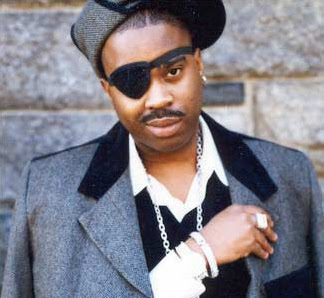 If you happen to be a listener of my podcast, the many moods of larrydigital, then you know that I'm a fan of rap music, particularly "old school" rap. Now, the phrase "old school" can be a little tricky as it could mean a number of different things in relation to rap music. Mostly because rap music, like all music really, is an evolving entity and as the genre progresses, more and more acts become "old school" as more and more rap listeners grow older. Just like how to my dad, "classic rock" meant Chuck Berry and Little Richard, to me "classic rock" means Led Zepplin and Pink Floyd and to my newborn son, "classic rock" might mean Foo Fighters and The Killers. Make sense?

Since I'm an older guy, old school rap to me means anything prior to "The Bridge" by MC Shan, which is about 1985. And as I mentioned in Episode 1: Fever in the Funkhouse of the many moods of larrydigital, one of my favorite old school rappers is Slick Rick. I must be a fan since I included in his song "Hey Young World" in my debut episode, right?

Now, Slick Rick (born Ricky Walters) is a good ol' fashioned hip-hop legend. As a semi-member of Doug E. Fresh's Get Fresh Crew, Rick scored two massive hits right out the gate with the 1984 single "The Show" and its b-side "La Di Da Di". The hits kept on coming up through 1988 when Rick released his debut album, "The Great Adventures of Slick Rick".

All was well and good until Rick managed to fuck everything up just two years later in 1990. He was arrested for two counts of attempted murder when he shot his cousin and an innocent bystander. His cousin, mind you, later admitted to trying to murder Rick so really, Rick's attempt at murder was some jackass version of revenge. Which is fucking mind-boggling to me. Here's a tip Rick: Call the fucking cops.

Anyway, Rick goes to jail and is eventually released in 1998 after serving 6 years of his 10 year sentence.

Now here's where it gets even more convoluted...

While Rick managed to stay out of trouble after his release from prison, in 2002 he is hired to perform on a cruise ship and is promptly arrested when the ship returns to port. Turns out that Rick was actually born in England and moved to the U.S. when he was 11. After the September 11th attacks in 2001, a law was passed that actually deports all non-U.S. citizens convicted of violent felonies. So while no one minded that he was still in the country after his conviction, officials had serious problems with his attempt to re-enter the country. He ends up serving another 17 months in prison while the Immigration and Naturalization Service tries to have him deported. Never mind the fact that Rick has no ties in his "home" country as he no longer has famiy there and he's lived in the Bronx with his wife and children (all U.S. citizens) since the mid-80s. Rick, of course, fights the case. The whole thing gets dropped in 2003 when the INS essentially gives up and Rick is released from prison. Again. All was well and good again until 2006 when out of the blue, the Department of Homeland Security begins yet another attempt at deporting Rick.

But then, word broke yesterday that New York state's latest governor David A. Paterson has issued a full and complete pardon of Slick Rick for his attempted murder conviction. Reports say that the pardon was issued in attempt to assist Rick in fighting his latest deportation case. There's not even a guarantee that the pardon would help Rick stay in the country, there's just the possibility that it might.

To me, this whole situation is all kinds of honked up. Now, don't get me wrong. I'm a fan. I saw Slick Rick perform live back in 1998 when he performed at the House of Blues on Sunset. He was scheduled to come on at 9:00pm but he didn't actually take the stage until 1:30am. Not the most professional guy around obviously, but damn it, he was worth the wait.

What I don't think he's worth is all the man hours our government is spending trying to "get" him. I mean, yes, Slick Rick is definitely a bonehead. No one is denying that. After all, he did try to kill someone. But he also served his time and by doing so, he's paid his debt to society, hasn't he? So why the hell would so many people spend so much time and effort to deal with a man who's reported had no legal trouble (of his own creation, I mean) since his conviction over 17 years ago? Apparently, he's remained on the straight and narrow so why would the INS and the Department of Homeland Security target this rapper? It's not he's Juelz Santana or anything, who plainly professed his admiration for 9/11 hijacker Mohammed Ata's courage.

In this day and age, when our government clearly has more pressing matters to deal with, why all the fuss for a musician that most people over the age of 30 don't even remember? Why the hell would someone like the governor of New York bother weighing in on the matter? Doesn't he of all people have more important things to do as well? The answer: yes. While some may see Paterson's involvement as an abuse of power, I just see it as your government at work. Bureaucracy for bureaucracy's sake. And, as a government employee myself, I know what I'm talking about. Sure, I've got a million other useless things to do but I can always find something new and equally useless but with a little more publicity to occupy my time.

Clearly, it must be one of two reasons, either he really loves "Children's Story" or he's after that oh-so-coveted hip-hop voting bloc when it comes time for his re-election.
Posted by larrydigital at 10:46 PM