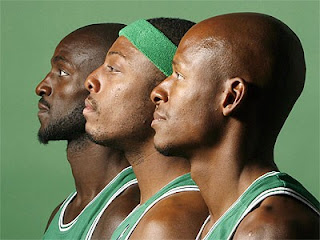 If you're one of the three people that read this blog then you know that I am an avid Laker fan. But this year, I'm going for the Celtics!

So let me explain.

For the last couple of years, I've been betting on the Lakers to win the NBA Championship. Seems like a decent bet right now but trust me, for the last couple of years, it's been a sucker's bet. I usually place my bet at Caesars Palace in Vegas and the first year I did it, right after the Shaquille O'Neal to Miami trade, the guy at the window looked at me and said, You know they traded Shaq, right?

Yes, I knew, but as the saying goes, I'm a fan of the name on the front of the jersey, not the name on the back. And you know, the odds weren't that bad that first year. Lakers had an 8-to-1 shot to win, which is pretty good. I guess because the Lakers were still the Western Conference champs, even if Shaq was no longer on the team.

Anyway, I might as well have just burned my cash the last couple of years since the Lakers had no chance at the title. Which didn't really bug me because, like I said, I'm a Laker fan.

Well, fast forward to this past summer. I went to Vegas in June but when I went to Caesars, they didn't let me make my bet since the 2007 Finals between the San Antonio Spurs and the Cleveland Cavaliers were still underway. Ok, no big deal, I was going to Vegas again two months later in August. I'd make my bet then.

So August rolls around and guess what, I forget to make the bet. Totally slips my mind. I didn't realize what I had done until we were on the road, halfway back to Los Angeles. Oh well, no big deal, I thought. Since the Lakers had no real shot at the title, right? I'll make my bet again next summer and this year, I guess I'll just save my $50 bucks. And since at the time, there was a very good chance that Kobe Bryant was going to get traded, I was beginning to feel like my blunder was a stroke of luck.

Well, the joke was on me because the season starts three months later and guess what... Kobe was still on the team and the Lakers were looking pretty good. Then they go and trade for Pau Fucking Gasol and the Lakers were suddenly contenders for the Finals.

I make a bet every year and one year I don't, they've actually got a shot to win it all. Back in August, when I should've made the bet, the odds on the Lakers winning were 20-to-1. My cheap $50 bet would earn me $1,000 if the Lakers win it all. Which they very well could! Dammit!

So yeah, even though I really, really hate the Celtics, part of me is hoping they win. Only because as much as I love the Lakers, I can't help but think about the $1,000 I'm missing out on. Anyway, even if the Lakers lose in the Finals (which I don't really want them to do), they'll have a shot next year when Andrew Bynum returns. Too bad the odds on them winning the Finals will back to, like, 8-to-1. Which is still decent I guess, but if you compare it to the 20-to-1 odds I could've had, 8-to-1 seems a little crappy.

And real quick: Fuck the Celtics. They have no right to be in the NBA Finals. Last year, 90% of the Celtics' fans quit on the team and actually cheered when they lost. Only because at the time, each loss potentially increased Boston's chances of landing Greg "Where Da White Women At?" Oden or Kevin Durant in the draft. But since there is some justice in the sports world, tanking (which is exactly what the Celtics did) never works and they miss out on both those guys. But then, out of the fucking blue, the ghost of Red Auerbach rises from the blackest pits of Hell and somehow forces Minnesota Timberwolves general manager (and former Celtic!) Kevin McHale to trade Kevin Garnett to the Celtics for a song. Which, overnight, makes the Celtics Finals contender as well. Say what you want about Lakers fans being bandwagoners but the fans never quit on the team to the point where they would cheer each loss. My point, Boston shouldn't get rewarded for quitting on their team.
Posted by larrydigital at 9:13 PM