Fire Up the Machine! 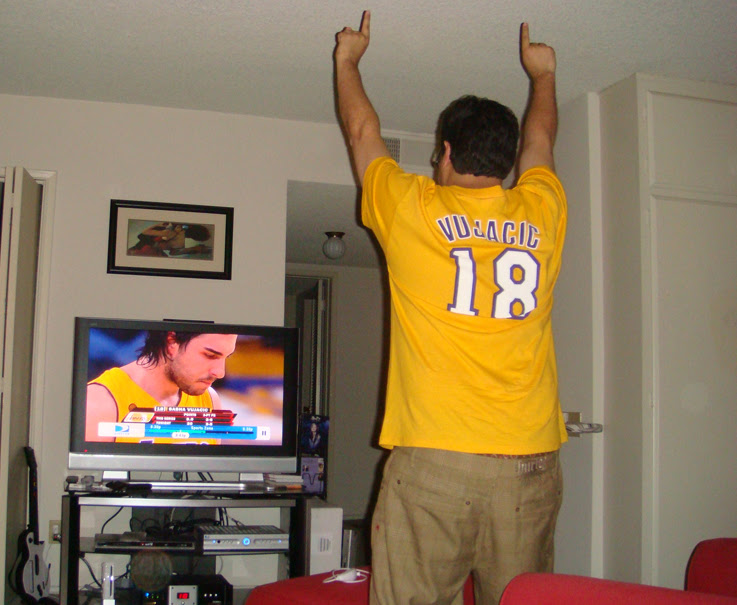 Despite what I may have previously written, I'm not really rooting for the Celtics. I say that I am only to lessen the potential blow of missing out on $1,000, but as I mentioned before, I'm a Laker fan through and through.

So imagine my disappointment when the Lakers went down 2-0 in the Finals against the Celtics. Now, regardless of what some people say (including my brother-in-law who knows nothing about the NBA), the Lakers weren't outplayed. They just lost. The Celtics were hitting their shots and the Lakers weren't. So for those first two games, the Celtics were the better team. Game 3 in Los Angeles, however, wasn't all that much better as Lamar Odom and Pau Gasol continued to suck ass and even though the Lakers got off to a hot start, for a minute there it looked like the Lakers were going to blow it. Again.

Luckily for the Lakers, Sasha "The Machine" Vujacic decided to show up. He scored a career playoff high of 20 points on 7 of 10 shooting to help the Lakers stay alive (for the time being at least) against the Celtics. Here's the thing though.... even though Sasha kicked a tremendous amount of ass, he's terribly inconsistent. So there's a chance he might shoot 2 for 7 in Game 4 on Thursday, which is exactly what he did in Game 1. But hey, that's still two days away. For now, I'm just going to be happy. Can you tell how ecstatic I am in the shot above?

I've actually hated Sasha for most of his NBA career because he's probably one of the softest players I've ever seen. And my favorite NBA player is Dirk Nowitzki so trust me, I know soft-ass players when I see them. Don't get me wrong, Sasha definitely had some things going for him. He was one of those pesky defenders that you absolutely hate to watch. Unless they're on your favorite team, of course because then, they're not annoying, they're just "hard-working." Plus I kind of admired him because from what I hear, he's a little bit of a playboy, even if he does have propensities for skanks and cougars.

Positive qualities aside, I just felt like Sasha wasn't the type of player that the Lakers needed to help the team should they ever get back to the NBA Finals. Truth be told, I sort of turned the corner on Sasha during the summer because I read an interview with him where he basically said that he was ready. His NBA career up until then had basically been all preparation and now he was ready to be that player that the Lakers needed. I didn't believe him at the time, and I still don't, but I definitely admired his confidence. And I've got to give the guy credit, he completely stepped his game up this season.

I have to admit, during the pre-season, I was looking at Sasha as a walking expiring contract. Now, I hope that Mitch Kupchak resigns him!