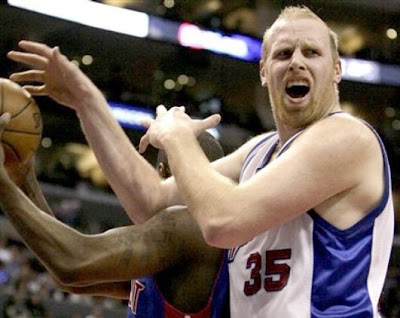 It's tough being a Clippers fan.

First, you have to contend with the fact that your team will forever be in the shadow of the Lakers, and second, your most well know fans are Billy Crystal, Frankie Muniz and the aforementioned Clipper Darrell, and third, your team is owned by the most apathetic man in pro sports. Combine your lame ass owner with the fact have that the team is run by what is probably the worst front office in the NBA and you've got a pretty crappy franchise.

A franchise that has squandered 20 (twenty!) lottery picks over the last 23 years, and 7 of those picks were top 3 picks! After a forgettable, injury-plagued 2007-2008 season, things were looking better for the Clippers when they somehow managed to lure away Los Angeles native and legitimate NBA superstar Baron Davis away from the Golden State Warriors. With a potential starting lineup of Davis, Elton Brand and Chris Kaman, things were looking up for the 2008-2009 season. But the Clippers being the Clippers, they fucked that all up with the quickness.

Mistake #1: Letting Corey Maggette walk for absolutely nothing. I happen to be a big Maggette fan because I think he's a rarity in the world of the NBA.... he's a reliable commodity. Corey may never be your star player, but he'll consistently get you five rebounds, three assists and 15 points a night, with 8 of those points coming from the free throw line. For whatever reason, thick-headed Clippers coach Mike Dunleavy chose to play Corey off the bench which clearly rubbed him the wrong way. In an ideal world, a player will remember that he's a professional and that if he's coach chooses him to be a reserve player, then it must be for the betterment of the team. But this isn't an ideal world and all Dunleavy succeeded in doing was alienate Maggette. So as soon as Corey had an option to get out of his contract with the Clippers, he bounces. Ironically, Maggette ends up signing with the Warriors, presumably to replace the departing Baron Davis.

Mistake #2: Losing Elton Brand, who also had an opt out clause in his contract, to the Philadelphia 76ers. Again, for absolutely nothing. This one I don't understand at all. Baron Davis and Elton Brand are photographed in Los Angeles together. On June 30, Brand opts out of his contract and announces that he's re-signing with the Clippers for a smaller contract. The next day, July 1, Davis opts out of his contract and announced that he has a verbal agreement to sign with the Clippers. Conveniently, Brand's smaller contract allows the Clippers to afford Davis. Sounds like a little bit of collusion, right? Well, I thought so until seven days later when ESPN announces Elton's signing with the 76ers. Elton staying in L.A. seemed like a done deal so what happened? According to Corey Maggette (no longer associated with either of the teams involved here), the Clippers basically offered Elton a take it or leave it deal. Which was exactly the wrong thing to do because Brand was under no obligation to stay. Way to go, Elgin Baylor.

Now, believe it or not, I have to give the Clippers some credit here. After bumbling away Brand and Maggette, they've managed to make a few decent personnel moves. Brand leaving cleared a tremendous amount of salary cap space so the Clippers were able to completely absorb the contract of former Defensive Player of the Year Marcus Camby from the penny pinching Denver Nuggets for essentially nothing. Plus they've signed all-around knucklehead Ricky Davis for cheap. Sure, Ricky is the guy who tried to cheat his way into a triple double when he was playing for the Cleveland Cavaliers, but at the very least he'll give the Clippers another scoring option.

Hey, who knows? Maybe this is good for the Clippers. Maybe a lineup of Baron Davis, Cuttino Mobley, Al Thornton, Ricky Davis, Marcus Camby and Chris Kaman might be ok. It doesn't look too good on paper but you never know. It's so crazy that it just might work!

I wonder who the Clippers are going to select with their 21st lottery pick next year for the 2009-2010 season.
Posted by larrydigital at 10:18 PM