I saw American Gangster today. I thought it was a pretty good movie. Sort of had to be, right? Denzel Washington, Russell Crowe, Ridley Scott, uh.... The RZA. It had all the makings of a good film but I couldn't help feeling a little disappointed when it was all over. And here's why.... 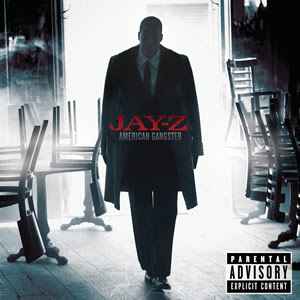 You've seen the commercial for the movie, right? You know the scene where Denzel walks into a darkened bar or whatever and fires a gun towards the camera and the muzzle flash briefly lights up his face? Well, guess what. That scene isn't even in the damn movie. I mean, it's in the trailer, it's a cool scene, it even inspired the album art for Jay-Z's latest album (right). How can this scene not make the final cut?

In my mind, the muzzle flash clip is the main highlight of the trailer. I wanted to see how it fit in the context of the film. So I waited. And waited. And waited. And when it never came, I was a little pissed. I expect I'd feel the same way if this happened in any other trailer. Like, if you see the trailer for Superman Returns and the whole Superman stopping a bullet with his eye scene doesn't make the final cut of the film. Don't get me wrong, American Gangster is still a really good movie and all but this is kind of like false adverstising, isn't it? Look, go see the film. It's good. Just now you know what not to expect when you do see it.
Posted by larrydigital at 6:37 PM