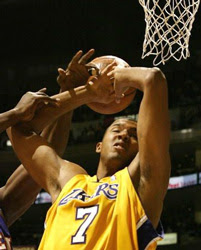 After bad mouthing Brian Cook in my last update, I get back to my desk not five minutes ago to learn that dream of dreams! The Lakers have traded Brian Cook to the Orlando Magic. Brian, along with the hard-working Maurice Evans, got swapped for former UCLA star, Trevor Ariza.

Now that he's gone, I actually feel a little bad for the guy. Not too much though, let's not forget that he sucks. He was probably the worst player not named Sasha Vujacic on the Lakers. He's even a worse prospect when you consider that the Lakers selected Brian over superstar 6th man Leandro Barbosa in the 2003 draft. But the reality is, last year Brian resigned with L.A. at a lower salary because he wanted to remain on the Lakers. He easily could've gotten more from some other team. Not that much more (remember, kids, he sucks) but still, the point remains. He stayed because he wanted to be a Laker.

In this day and age where some sports "stars", who are nothing more than glorified mercenaries, routinely threaten to force trades because "they want to win" (*cough* Kobe Bryant *cough*), shouldn't a player like Brian Cook be admired? Or at the very least respected? After all, he made a personal sacrifice to remain with the city that he considered home. Eh, maybe not.

Anyway, see you around Brian Cook, you won't be missed. Because remember, kids, he sucks.
Posted by larrydigital at 3:42 PM