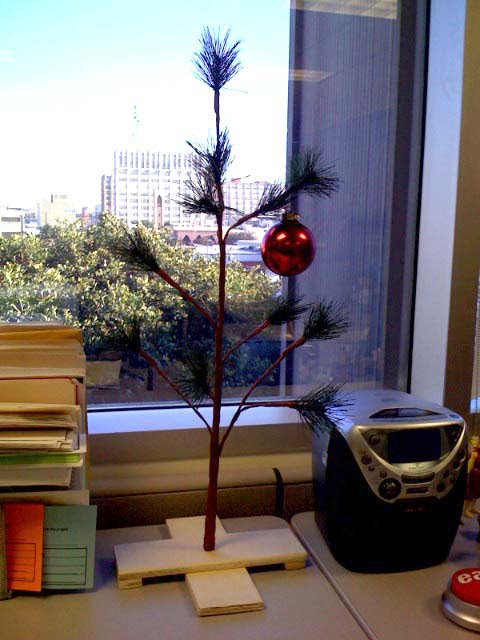 I watched A Charlie Brown Christmas last night and I have to say that it was probably one of the more depressing programs I've ever seen. I'd never seen the whole thing start to finish but last night I made a point to sit down and check it out. If you haven't seen it before, basically Charlie Brown walks around depressed, all the while searching for the true meaning of Christmas. I guess he noticed that Christmas, like most holidays these days, are based on perceived consumer ideals and are rarely celebrated for the reasons that they were founded for.

Which makes my newly-purchased Charlie Brown tree (above) more than a little ironic... but I digress.

This is most obvious example of Charlie's frustration with a consumerized Christmas is the scene where Lucy sends Charlie sent to get a Christmas tree for the school Nativity play. A "big, shiny, aluminum tree," Lucy says. Now, it should be noted that at this point, Charlie is the director of the play (a post, I must add, which was given to him by Lucy out of pity in an attempt to cure his depression). But since all the castmembers (to a one!) ignored him, his role was reduced to searching for props. Charlie bypasses all those fake trees and buys the only real tree left on the lot (now that's a message), a sad little sapling. Of course, everybody hates and berates poor ol' Charlie because of it. Dejected, Charlie asks if anyone knows what Christmas is really all about. Linus quotes the gospel of Luke and Charlie leaves. On his way home, he takes an ornament from Snoopy's garishly decorated doghouse and places it on his tree. The weight of ornament then causes the poor tree to bend in half. At which point, Charlie exclaims "Everything I touch gets ruined!"

Let's think about this for a second. He said, "Everything I touch gets ruined." How harsh is that? Charlie Brown and the Peanuts gang are supposed to be in the 3rd grade, right? And here you have 8 year old Charlie Brown wrestling with such concepts as depression and alienation, he's already had a crisis of faith and I'm not even going to bother getting into his obvious inferiority complex. Pretty adult themes for a children's cartoon, I think.

The flip side to all that is that Charlie Brown is the ultimate underdog. He always is trying to kick the football even though he knows that that bitch Lucy is going to yank it away. It doesn't matter that his baseball team is apparently the worst ever to take the field, he's out there on the mound every game. He never quits and he's someone that you can't help but root for.

Truthfully, I'm not a big Peanuts fan. As you might be able to tell, I've always found the stories a little depressing. Now, to me, Christmas has always been the most depressing holiday and A Charlie Brown Christmas just reinforced this belief for me. I mean, man, I was bummed out towards the end. Even when all the kids realized what they were doing to Charlie, it was still a little painful for me. Believe it or not, despite all of that, I actually enjoyed it. It had pretty much everything you need for a children's program. It had alienation and rejection, degradation and humiliation but at the end, it had a little redemption for everyone. What more could you possibly want?

I'm sure most of you have seen it, after all, it is 42 years old. But for me, it was a new, yet somehow familiar experience.
Posted by larrydigital at 12:13 PM