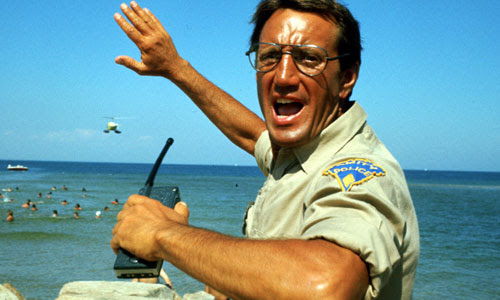 I like to tell myself that I don't watch a lot of television but I do. In addition to watching an entire assload of sports, I tend to watch a lot of movies as well. In the last month alone, I figure that I've seen about 20 movies. Mostly foreign films (preferably the kind where everybody dies and I don't completely understand what happened at the end..... hellloooooo Tokyo Drifter) and films from the 1970s. By sheer coincidence, I've recently watched The French Connection, Jaws 2 and All That Jazz.

So it was a little bit of a bummer when I read that he died yesterday in Arkansas.

While I won't go as far as saying that Roy Scheider was one of my favorite actors (that's reserved for Robert Duvall and Clint Eastwood), I will say that I thought that he was a very talented man. His career may have tapered off a little towards the end but he left movie buffs like myself with a truly classic body of work.

Slow ahead, Chief Brody, slow ahead.
Posted by larrydigital at 9:08 PM

Richard Dreyfus is now the last guy left on the boat.

I like Scheider too. However, the thing I always remember about him is that some guy I knew in college lived in the same Manhattan apartment building as he did. And that was AFTER Jaws. That always seemed kind of cool to me.

Who will be number three?