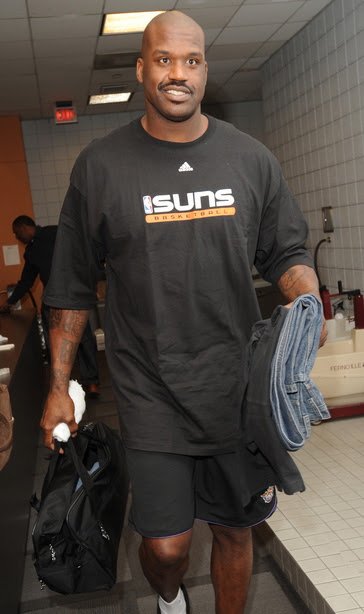 I will never be the general manager of an NBA team.

Earlier today, the Phoenix Suns traded Shawn Marion to the Miami Heat for Shaquille O'Neal. The Heat also received perennial under- achiever Marcus Banks in the deal. I simply do not understand the logic behind this move. I mean, everything about this trade screams PANIC MOVE. Maybe to somehow combat the Lakers' acquisition of Pau Gasol or something but as evidenced by the Lakers' loss to the Atlanta Hawks earlier today, there really was no need to make ridiculous moves just yet.

I mean, yes, Shaq is a former MVP and a former 14-time All-Star but that seems like it was 100 years ago. Truly, in his day, Shaquille O'Neal was the most dominant center of his generation but unfortunately, his day is long, long, looooong over. He's been plagued by injuries all season long and for him to fit into the Suns' uptempo game, Shaq would have to show a level of motivation that seems to have left him years ago. Shawn Marion, it should be noted, is also a former All-Star. He's younger, faster, has a cheaper contract and is far more suited to the Suns run-and-gun style. Marion's a stud, so it's not quite the sack of magic beans that the Lakers got in return for Shaquille in 2004. But, it's been reported that Marion doesn't get along with Suns' big man Amare Stoudamire and is planning to opt out of his contract at the end of the year. So I suppose that the Suns figured that they may as well trade him than lose him at the end of the year for nothing.

The knock on the Suns is that while they are a talented team, they don't quite have all the pieces to beat the elite teams in the West like the San Antonio Spurs or the Dallas Mavericks. Which is true, by the way. The Suns usually murder teams during the regular season and sort of fizzle out in the playoffs. So yes, they probably needed to make some sort of move but trading for a massive injury risk player that is clearly past his prime.

Currently, the Suns are ahead of the Lakers in the Pacific Division (barely!) and first in the Western Conference so it's business as usual for them. Yes, they could've done something but the rumored deal with the Charlotte Bobcats for Emeka Okafor or the other rumored deal with the Philadelphia 76ers for Samuel Dalembert would have made far, far more sense. In either of those cases you're rolling the dice with younger players. Plus, neither one of those dudes is the defensive liability that Shaq is at this point in his career. All the Suns have done by trading for Shaq is made their championship window even smaller. A 34-year-old Steve Nash and a 35-year-old Shaquille O'Neal has a window of maybe, maybe a year and half and then all bets are off.

Actually, you know what, I've thought about it and this Suns/Heat swap is a great trade... for the Lakers.
Posted by larrydigital at 8:57 PM