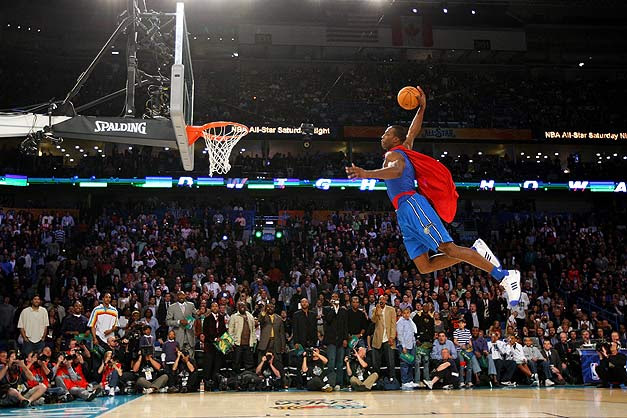 As you might have gathered, I'm not a Shaquille O'Neal fan. One of the trademarks I guess of Shaq's career has been his self-proclaimed "Superman" title. From the "S" tattoo on his bicep to his custom made car to his turn as a Superman-related character in the dreadful, dreadful movie Steel, Shaq's affinity for Superman has been well documented and the association has stuck.

Well, all that's over. After the NBA's All-Star festivities last night in New Orleans, it appears there's a new Superman in town. During the dunk contest, Orlando Magic All-Star center Dwight Howard, broke out a special dunk. He removed his jersey to reveal a Superman shirt, put on a Superman cape and proceeded to fly through the air. Normally I'm not a fan of the dunk contest, preferring in-game dunks to these completely staged productions. But I have to admit, Dwight's dunk was pretty spectacular. Shortly after his dunk, the arena filled with the Superman theme song, specifically for Dwight.

Dwight's been steadily improving since coming into the league 4 years ago and just this afternoon, he made his first appearance as a starter in the NBA All-Star game. Coincidentally, Shaq's been declining over the last 3 years, mostly due to injuries. And, to add insult to said injuries, Dwight was introduced as Dwight "Superman" Howard. Ironically, Dwight's inclusion as a starter ends Shaq's run of 14 consecutive All-Star appearances.

Sorry, Shaq, it appears that you've been replaced.