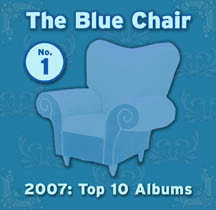 As one astute listener of the many moods of larrydigital recently pointed out (ok, it was my wife), the majority of music that I play in my podcast is old. Very old. In my latest episode, Episode 5: Bring It On Down To Soulsville, the most current song I play is from 1975. I try to include more recent music when possible, as evidenced in Episode 4: It's A Brand New Day, but I can't really help the fact that I enjoy older music. It's what I play because it's what I like. I guess the fact that I rarely listen to music for pleasure these days doesn't help either. I'm just usually screening for potential podcasts inclusions so occasionally I'll pepper in something from this century, but mostly my screening has me reaching backwards through the years.

So what's a music fan who wants to hear more current music to do?

Well, check out the Chazzcast, of course! My main man Jim Chadwick caught the podcast bug himself and put together The Blue Chair (the podcast's actual name, don't call it The Chazzcast), a sampling of some of Jim's favorite songs from the past year. I thoroughly enjoyed the The Blue Chair myself because as I mentioned, it featured a lot of new stuff that I wasn't all that familiar with. I'd read about a lot of bands in The Blue Chair but I hadn't had to opportunity to actually listen to most of them.

Part of the reason I began my podcast is because I was tired of hearing the same 12 songs an hour on terrestrial radio stations and I'm not about to plunk down my hard earned eCash on stuff that I've never heard (no, I'd rather spend my cash on songs I've heard a thousand times before). Plus I'm far too cheap to pay for satellite radio. So I'm glad that there's at least two new very different outlets for music these days. Even though I'm fairly certain that Jim and I are each other's podcast's only listeners.

You want Isaac Hayes and Desmond Dekker? I'm your guy. You want some Devendra Barhart and PJ Harvey? Jim's your man. I try to specialize on artists that are largely forgotten while Jim plays artists that are largely ignored by conventional outlets (although some of Jim's do get a metric ass-ton of attention from rock critics). There's some great music out there old and new, I just wish sometimes that it wasn't such a pain in the ass to discover that music.

Thanks for the plug Larry! I am frantically working on my special "St. Patrick's Day" show. It's a holiday I don't care much for, but I do like Irish music and music by a lot of Irish artists, so there will definitely be some old stuff in there.

And please check with me first before you buy any more re-mastered Led Zeppelin collections. You don't need to be wasting your money on that. Look at me: I'm officially boycotting any new, re-mastered Elvis Costello albums, because some of them have now been re-released four times now. I love Elvis, but I get angry when companies try to get me to keep spending money on the same old stuff. I'd rather give something new a shot.