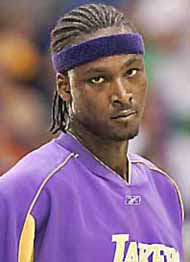 I've come to bury Kwame Brown, not to praise him.

You know, for the record, I never really hated Kwame Brown. Sure, as a Laker fan, he pisses me off a ton of times. Believe me, there were no shortage of reasons to dislike the guy. Whether it was his lack of basketball IQ, his hands of stone, his consistent ability to miss point blank lay ups or the fact that he launched overpriced cakes with better accuracy than he shot a basketball, it was always something with Kwame.

I mean, he's not an unrepentant jackass like Stephen Jackson or a overpaid tub of goo that just doesn't get it like Zach Randolph or just a plain fucking lunatic like Ron Artest. Kwame's biggest fault that he was a low court IQ player that couldn't wrap his cornrows around the triangle offense. But like I said, he's means well.

However, none of that matters anymore because this afternoon, the Kwame Brown Era in Los Angeles came to a crashing end. This afternoon, the Los Angeles Lakers traded Kwame Brown, rookie point guard Javaris Crittenton and two future 1st round picks to the Memphis Grizzlies for the 2002 Rookie of the Year and former 2006 All-Star (and the object of my not-so-secret mancrush) Pau Gasol (pronounced "pow"). In a cruel twist of fate, the Grizzlies also received the rights to Marc Gasol, Pau's younger brother, who the Lakers selected in the second round of the 2007 draft. Bummer for Marc, right? Imagine that.... Marc, I've got some good news and bad news for you.... The good news, your brother Pau is joining us on the Lakers, the bad news.... 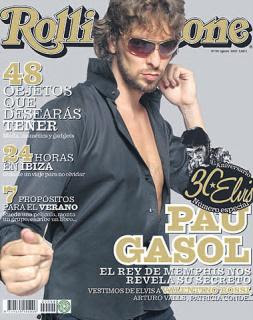 As evidenced by this cover from the July 2007 Spanish edition of Rolling Stone magazine, Pau Gasol is a rock star. He's actually my 2nd favorite player in the NBA (right behind Dirk "German Jesus" Nowitzki) so I don't think I can fully express how awesome it is that he's coming to my favorite team. What's extra awesome about this trade (awesomer!) is that Pau shores up the Lakers' front court which has been woefully thin since Andrew Bynum went down and it makes the Lakers legitimate title contenders in the Western Conference. I'd have to say that not counting Karl Malone (because his tenure was brief and injury-ridden), Pau is the best power forward the Lakers have had since Big Game James Worthy. Which may not sound like much considering that my pregnant wife is a better defender right now than Slava Medvedenko was when he was actually starting but I think you understand my point.

As painful as it is for me to say, I think Mitch Kupchak deserves serious consideration for the NBA's General Manager of the Year. It's painful because up until now, we Laker fans have suffered through Mitch's decisions. Drafting Brian Cook over Josh Howard? Really? Signing Smush Parker and Aaron McKie? Seriously? Signing and then waiving Koko Archibong? Hey Mitch, you never, ever waive a guy named Archibong. NEVER.

And unlike Danny Ainge, who used the ghost of Red Auberbach to force Kevin McHale to trade Kevin Garnett to the Boston Celtics for a song, Mitch Kupchak didn't have too many trades until very recently and rebuilt the Lakers in this most difficult way possible.... through the draft. Of course, the Gasol trade is a huge boost, as was the Trevor Ariza trade albeit in a small manner, but if you look at the team Mitch has crafted, it's built to win now and it's ready for the future thanks to the presence of Jordan Farmar, Ronny Turiaf, Sasha "The Machine" Vujacic, etc.

Anyway, the Lakers are back, ladies and gentlemen. It's going to be an exciting ride. And I don't know about you guys but I think I'd kill to see the Lakers and the Celtics in the 2008 NBA Finals.
Posted by larrydigital at 9:04 PM