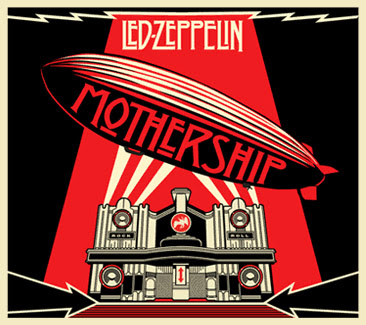 I plunked down 14 of my iDollars today and downloaded the new Led Zeppelin greatest hits, Mothership, from iTunes. It was pretty good but other than boasting a REMASTERED sound, it didn't offer anything new. It's the same songs that you've heard a million times before. No outtakes, no live versions, no alternate takes, no nothing.

So if you already own the original albums and/or the best of double CDs, then you already have pretty much all you need. Now, I already own all the albums on vinyl, Led Zeppelin I-III and Houses of the Holy on CD plus I have the aforementioned Early Days/Latter Days double discs.

I remember I paid $6.99 each for each of the vinyls at Record Trader in Northridge (now closed) in like, 1990. I also paid $7.99 for each of the CDs, also at Record Trader in 1996. I think the double discs cost $13.99 at CD Trader on Ventura 3 or 4 years ago. (Admittedly, I didn't need the double discs at this point. I just didn't want to go digging through storage because I wanted "Kashmir" as mood music on my outgoing voicemail message.) Adding in the cost of Mothership, I've essentially bought and re-bought the exact same songs over an 18 year period for a grand total of $138.84.

I've always wondered why repackaged material from "classic" bands sell as well as they do. First off, is there really that much demand for yet another greatest hits compilation? And are consumers (like me apparently) such sheep that they don't notice that they're essentially just wasting their money on stuff they already own? Do people these days really have that much disposable income?

Earlier this year, a new Traveling Wilburys collection got released. Was there a demand for that? Really? I know that despite the presence of Bob Dylan, the late great Roy Orbison and the equally late and great George Harrison, you can't compare the Wilburys to Led Zeppelin but still the point remains... How long are we going to have re-buy the same crap over and over again each time there's an anniversary or when some new technology is released? Apparently forever.

(Don't even get me started on the whole Blu Ray vs. HD DVD argument. They're both a fucking waste of money.)

And here, despite all that, I went out about jumped in feet first to the never-ending churn of recycled (excuse me, I mean REMASTERED) products. So yeah, I felt a little stupid after that realization. Although I've got to admit, Mothership does have a pretty kick ass cover. I just don't know if it was worth the $138.84 I paid for it.
Posted by larrydigital at 5:11 PM