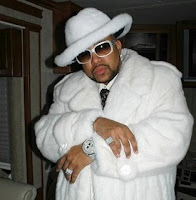 Brothers and sisters, it is my sad duty to report that last night, we lost another soldier. My man, Pimp C, the OG playa from H-Town, one half of Texas rap superstars UGK, was found dead in his West Hollywood hotel room under what the "authorities" are describing as mysterious circumstances. As we all know, the rap game is a struggle. It was only a matter of time before the hood done took him under.

Words cannot describe the way I feel right now. So I won't even try. Instead, I'll let Pimp C himself say it, as he preached on his 2006 album, Pimpalation....

"You takin' these square ho's out to dinner,
the bitch chose me 'cause she want a winner,
I mix her whole head up like a blender,
ho need a daddy, you's a pretender"

Posted by larrydigital at 1:08 AM