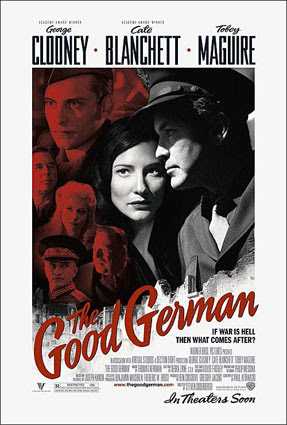 The Good German is a terrible, terrible movie.

For some reason, I cannot stop a movie midway through. No matter how terrible a film is, I have to finish it. Over the years, this has been both good and bad. Good because had I stopped watching the original Planet of the Apes film (which I've found it mediocre at best), I'd have missed the cool twist ending which saved it somewhat for me. And bad because in a movie like Oldboy, which I really enjoyed only to have the entire film perverted by the unnecessarily grotesque (to me, at least) ending.

Back to The Good German, I know it came out in 2006 but I only recently watched it on DVD. Finally. I received it from Netflix back in August. Truthfully, I could've waited even longer to watch. The black and white gimmick was quaint but the joke got old real quick. I mean, I get it. The film is designed to take the viewer back to a time (namely the 1940's) when films were a touch more dramatic but at the same time, a little more understated. The actors were there to drive the film, not the action of the scenes, and their dialogue and actions reflect that (right?). Yet it doesn't make it because while the film does set a proper mood, I felt the graphic language and awkwardly unsexy sex scene (both strictly verboten in movies of that era) yanked me out of the moment every time.

You could tell that the director was trying like hell to replicate the feel of a 50 year-old movie, from the pensive stares of the male characters while the background music swells to the overly exaggerated hair flips from the downtrodden female characters. And I guess that was my big problem with The Good German. I couldn't really tell what this movie's purpose was. Was it to prove that George Clooney was the only honest man left in Berlin? Did Cate Blanchett still love George Clooney after surviving the atrocities of war? And what about Toby Maguire's character? Hey, you know what, who gives a crap?

This movie was lame.

So lame in fact it drove me to rant!

Imagine that!
Posted by larrydigital at 1:04 PM