Back when I was still in college, I had a job interning for a subsidiary of Marvel Comics in Calabasas. It was around this time of year so the company was sponsoring it's annual Christmas party.

One of the events at the party was an anonymous gift exchange. All we had to do was bring a wrapped present ($10 minimum) and place it on a large table. When it came time for the actual exchange, we just walked up to the table and selected a present. After you opened it, the person who brought it was supposed to come over and introduce themselves. Sounds simple, right? My present was a $20 gift certificate to Tower Records. Not exactly an extravagant gift but considering that at the time I was making $5.25, it was a bit of an investment for me. And yes, I know the minimum was only $10 but at the time, you couldn't get anything at Tower for $10. I wanted the recipient of my gift to be able to get themselves something.

So when my table's turn to select a gift rolled around, we all walked up and got a present. I selected a slim box, about 6 inches square, not the biggest box but not the smallest either. I waited patiently as my tablemates opened their gifts and saw that most people were getting decent items... movie tickets! See's Candy! A Lakers calendar!

Now it was my turn. 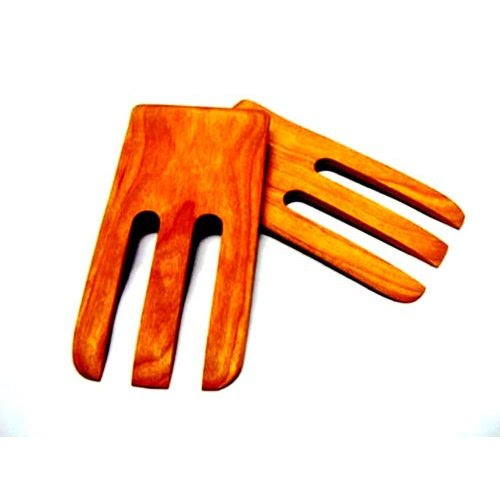 Slowly, I opened up my average sized box to find... Salad Fingers! Normally, I'm not the type of person who complains about gifts because, after all, it really is the thought that counts but to say I was disappointed is an understatement. Because whoever brought fucking Salad Fingers put absolutely no thought into it at all. It was like they wrapped up whatever random junk they had around the house and brought it to the party. And by the way, there was a $10 minimum! There's no way in hell these useless pieces of driftwood cost $10. Naturally, no one introduced themselves to me after all the gifts were opened.

Salad Fingers aside, it ended up being a pretty nice party and despite my lame ass gift, I had a good time. In fact, I actually won a VCR in the final company raffle. And since I didn't have one at the time, getting a free VCR was a pretty nice consolation prize. It more than made up for the crap Salad Fingers.

But little did I know that my adventures with Salad Fingers were only just beginning.

After the party, I stopped by my friend Ed's house. He had mentioned that he couldn't really hang out because he was on his way to his classmate's Christmas party. I was welcome to come if I wanted to but... I had to bring a gift.

Borrowing some paper from Ed's girlfriend, I quickly re-wrapped the Salad Fingers and headed out to the party. Turns out the gift exchange there was the same as my office party's, unsigned gift on a large table, grab one when you're ready. A discreetly hid the Salad Fingers in the back and selected a similarly sized box and walked away. I settle in with my friends and opened my new gift... Tombstone on VHS. All right! The perfect thing to go with my new VCR!

Now, I realize that it was pretty shitty of me to re-gift a crap gift especially since receiving said crap gift upset me so much. But I thought, hey, these are Ed's friends, not mine. From what I remember (which isn't much because I got pretty drunk that night), this turned out to be a pretty good party too. I may not remember too much about that party but the one thing I'll never forget is, as I was polished off my fourth beer, off in the distance, from the other side of the house, I hear...

"WHAT THE FUCK ARE SALAD FINGERS?"
Posted by larrydigital at 3:53 PM

I wanted you to know that I LOVE my salad fingers!!!! You, receiving salad fingers is better than my used bottle of brandy I received at a gift exchange. Horray for SALAD FINGERS!!!!!